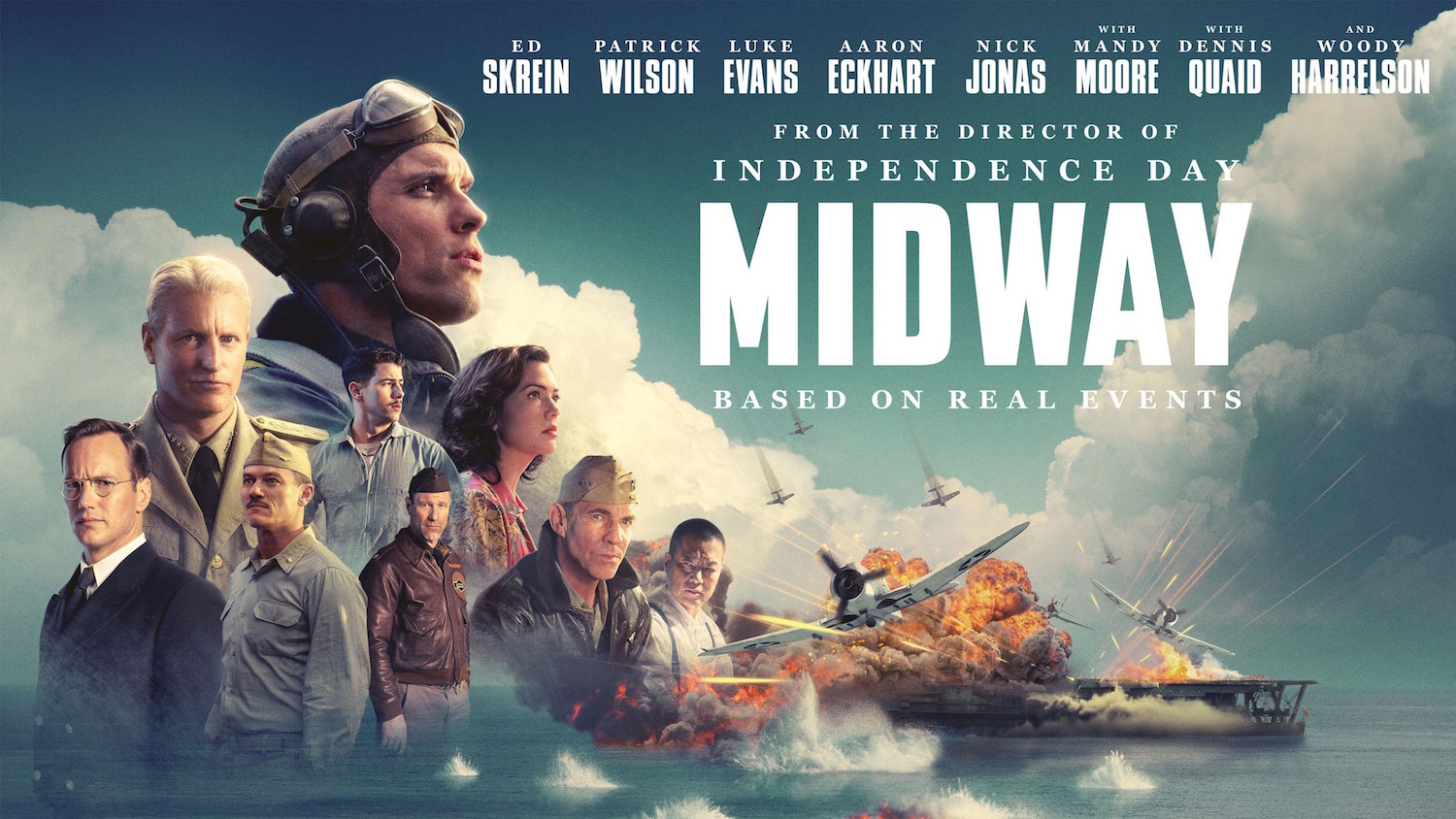 Roland Emmerich is known for his blockbuster films, including Independence Day, The Day After Tomorrow, 10,000 BC, 2012 and now Midway.

Based on the battle of Midway, which followed the Pearl Harbor attack towards the end of World War II, this passion project for Emmerich is one of the most expensive independent films of all time. Clocking in at $100 million, it serves as a tribute to the heroes and men who lost their lives over this critical turning point during World War II, releasing on Veteran’s Day weekend in the United States.

As we’ve come to expect with Emmerich, it’s heavily laden with CGI, not aiming for complete historical accuracy and leans quite heavily on epic action set pieces. Aiming to catch some of the anticipation around the sequel to Top Gun, leveraging some of the ambition around Dunkirk and revisiting some of the elements that made Pearl Harbor appealing, you can see that Roland Emmerich is really trying here.

While a seasoned director, unfortunately Midway seems to have moved too quickly and despite his attempts for greater historical accuracy and authenticity, it’s half-baked. Many screenplays take up to a decade to be ready. Yet, Mike Myers wrote Austin Powers over a few days – although he claims that 30-40% was improvised.

Midway features a handsome cast, including Patrick Wilson, Woody Harrelson and Ed Skrein. While Emmerich has amassed an impressive cast for his war movie, you imagine that it was more the pay check than the script that won them over. While the actors attempt to add nuance to their thin characters, it’s all rather generic and underwhelming affair when it comes to characterisation. Harrelson and Wilson are the pick of the actors with Skrein making a Billy Idol movie seem possible, but as much as they try, it’s all rather professional.

You can identify who the leads are based on screen time, yet very little has been done to endear us or draw empathy, forcing the audience to watch at an arm’s length. It’s not for a lack of talent, that the actors aren’t sinking their teeth into these roles, but rather fuzzy dialogue. Apart from clichéd war hero talk, there’s very little to define these characters or even demonstrate their inner thoughts and motivations.

They are a bit impenetrable when it comes to accessibility, acting as though most of what they’ve got to say is simply filler. Emmerich obviously didn’t have the behind-the-scenes lowdown on every single character, but when it comes to artistic licence and entertainment value, there’s nothing stopping him from representing more relatable, flawed and conflicted characters… it’s an Emmerich movie!

Simply going through the motions, the film does come to focus most of the attention on the spectacle – action and visual effects. The CGI is impressive and generally of a high standard, although with such an abundance, films like this tend to get lost in a sea of unreal.

While a lot of money went into the making of Midway, you get the impression that more time should have been dedicated to the pre-production planning phase, most notably the screenplay. Depending on your genre, research and fine tuning, the screenwriting process can vary from slapdash speed wobble to dust-gathering meticulous.

The two-dimensional characters could have been ripped from the pages of war comic books yet still don’t have a sense of urgency or motivation. Employing a kind of group-think, not bothering to actually find a an individual voice for each of the characters and failing to add enough texture to make them interesting, the screenplay tanks.

It’s quite amazing that the film was still so well-received based on this apparent distance with the characters. One would hope that a director of Roland Emmerich’s standing would hopefully take some of this criticism to heart and spend much more time in crafting a worthy screenplay for his next passion project.