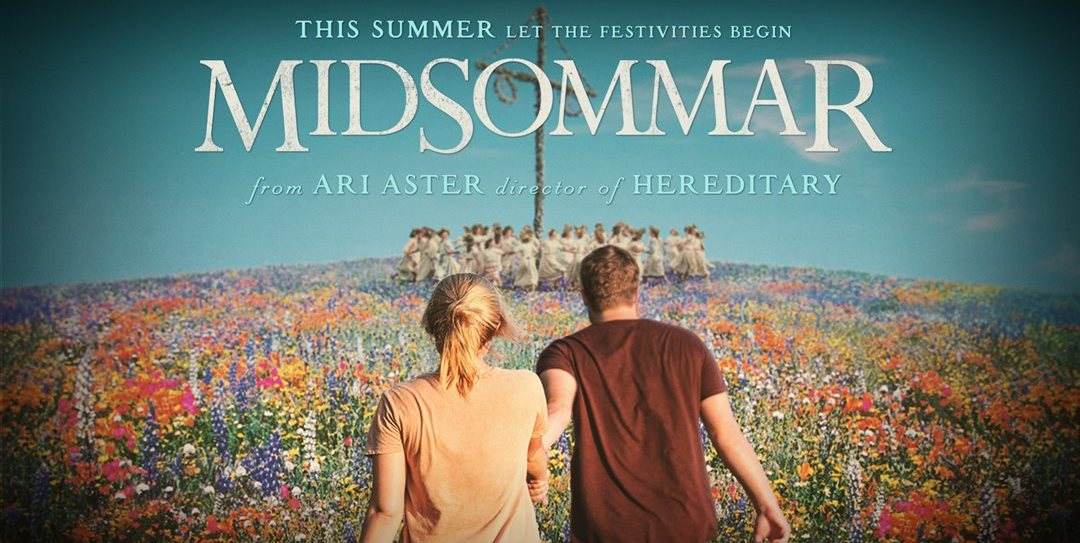 Midsommar is a folk horror directed by Hereditary’s visionary, Ari Aster. Set in Sweden, the journey details the lives of several young travelers, who embark on a study holiday that will change their lives forever. After some culture shock, they soon find themselves spiraling out of control as the chasm gets darker and deeper.

Aster is a horror aficionado, whose admiration of Stanley Kubrick is demonstrated in his work. Having a knack for writing and directing within the genre as evidenced in the elegant and unsettling Hereditary, he has set a high standard for himself, directing Toni Collette to what should have been an award-winning performance. Highly regarded, despite the wheels coming off in the climactic and cataclysmic third act, Aster is still an auteur whose career is worth following.

Midsommar stars Florence Pugh as Dani, the new it-girl in Hollywood, who rose to prominence in Fighting with my Family. A fascinating face, she is also versatile and incredibly talented, encapsulating a whole range emotion to reflect the terror, pain and horror of being subjugated along with her friends.

She’s supported by Jack Reynor as Christian, another actor who is leaving a series of solid performances in his wake. Aster demands strong performances and challenges his cast, taking them to strange and twisted places along with their characters.

Something of a day to Hereditary’s night, Midsommar follows Dani, a young woman seeking connection in the world, alienated and orphaned after a family tragedy.

Clinging closer to her boyfriend, Christian, she joins his friends whose mission it is to witness a small medieval community who are celebrating an ancient festival. What starts like a hippie gathering with maypoles and flowers soon becomes a much more death-defying prospect as symbols, rituals and groupthink take over.

This is a director’s film, employing the kind of cinematography and shot choices you would expect from a master. It’s clear that Aster has strong influences, but his work is pushing boundaries and he’s becoming a director to watch.

Midsommar is not for sensitive viewers and earns its age restriction and then some, delving into a religious sect comparable with The Wicker Man and even Salo.

Living vicariously through the adventurers, who have been coaxed and placated to staying under the influence of an inside friend and community leaders, this freewheeling drug fest turns into a blazing nightmare. Bright as angels, dressed in white and driven by a sense of lunacy, the gay abandon gives way to the cruelty of a twisted society.

Aster draws parallels with Nazism as people fall prey to a devastating system of oppression at the hands of powerful officials as atrocities play out to cleanse a community. Setting the film in Germany would have been too obvious and on the nose, which is probably why he opted to push off the Aryan stereotype of blonde hair and blue-eyed Swedes. Aster immerses his audience in this wild environment using intermittent shock tactics to maintain a taut line as he reels us in, peeling away one layer after another.

While the brightness of the visuals makes for a very different horror experience, there’s a reason the genre has become clichéd when it comes to the use of darkness, shadows, smoke and mirrors. Fighting against all of these tropes, Aster reverses things by making interiors dark and the outdoors over-exposed. Each scene shows forethought, an artful eye and plenty of creativity. Using culture shock and rich symbology, he creates an environment with a sense of history much like the hieroglyphics of Egyptian culture.

This adds depth and also creates uncertainty using a naïve set of images to speak to ancient times with a slanted view of humanity. Civil yet uncivilised, light yet dark, welcoming yet hostile…

Midsommar hovers precariously, creating a sense of uncertainty and imminent danger. The problem with keeping things light is that everything is scrutinised, able to be seen for exactly what it is. A hint can work much better for the imagination than having something a completely visible and under the microscope. Some of the visual effects are completely immersive, while others seem a bit forced and fake.

While Aster is masterful in terms of building suspense, taking us to all kinds of frightening places, some of the effects are lost or diminished in the cold naked light.

Midsommar is more even-handed than Hereditary, artful in style, original in perspective, well-acted and rich in thematic content. It’s a fine production, carrying dread and suspense through its veins, able to unsettle through its bright visual tapestry and harrowing out-of-control horror experience. While its laden with talent and vision, it’s offset by its own dizziness and displaced by its camp undertones. While often under the influence, the characters lack awareness, seemingly helpless and numb to the story’s tide.

The overexposed visuals work for and against it, giving the horror a fresh feel but restraining the realism through so-so visual effects and production design. While troubled like Hereditary, Aster’s influences and great understanding give Midsommar the earmarks of a masterpiece.