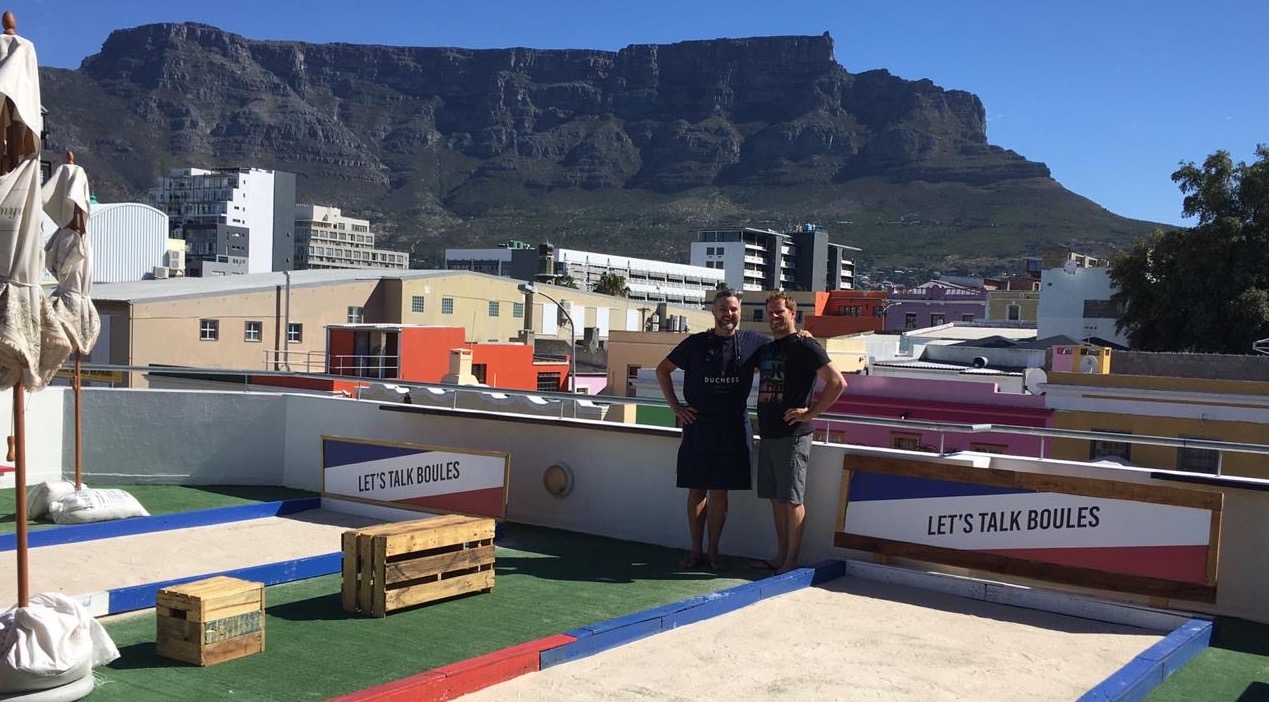 Let's Talk Boules
Let's Talk Boules are introducing Capetonians to their take on the famous European game of Boules. Experience the much loved French past time, Boules - with a South African flare!

Let's Talk Boules are introducing Capetonians to their take on the famous European game of Boules. Experience the much loved French past time, Boules - with a South African flare!

Let's Talk Boules
Let's Talk Boules are introducing Capetonians to their take on the famous European game of Boules. Experience the much loved French past time, Boules - with a South African flare!

Let's Talk Boules are creating community and fun in Cape Town by providing a Cape Town twist on France's favourite past time - Boules!

Come experience the world of Let's Talk Boules - an activity pop-up that has brought the fun of France's favourite past time boules (i.e., like lawn bowls except you lob the ball instead of rolling it) to Cape Town's most underrated rooftop.

Let's Talk Boules provides Capetonians with a unique experience where people can connect while eating Harvest's tasty and healthy food, drink refreshing drinks like The Duchess's G&Ts and take part in an easy to play and highly enjoyable activity - Boules!

Let's Talk Boules is perfect for corporate functions, birthday parties, bachelors/bachelorettes, and the ideal way to break the ice on a first date!

Boules is colloquial grouping term for a variety of ball sports - where the aim is to place your ball closest to the target ball.

The traditional French version originated in the South of France and is called "Le Pétanque". Players toss larger metal balls in an attempt to position them closest to the "jack" (target ball) or "Cochonnet" in French.

Players are divided into 2 teams - with a simple objective, get your ball closest to the jack. The opposing team can also use their balls to knock your placed balls further from the jack.

This game is not physically strenuous and often favoured by the older community in South Africa, however across Europe you will find children and adults of all ages playing a form of Boules.

Stay Tuned!! Vibescout have planned an outing to Let's Talk Boules and cannot wait to share our own experience!!

Harvest Cafe & Deli play host to this newly loved South African activity, The Deli will be serving up your favourite dishes you have come to know and love, accompanied by a selection of tasty beverages.

Come play a game - or 3 while taking in the beautiful views of Table Mountain, Devil's Peak and Lion's Head. And further, do this all while enjoying Harvest's favourite food and a great selection of beverages.

These Pop Up Events will end in February 2020 - however Let's Talk Boules will remain at Harvest Cafe & Deli until late March for private bookings!

What an epic afternoon is the first thing that comes to mind when we think back to Saturday!

We arrived at 2:30pm, some of us a little later, to be greeted with open arms by co-owner Byron, ready and eager to get us started. After the quick introduction to the game and rule briefing we were ready to get tossing!

Our tribe was split 4 teams for a mini Vibescout tournament - we are a rather competitive bunch. Many laughs, oohs and aahs and disappointing moans filled the atmosphere. Its hard to not get excited when playing this very entertaining game! Luckily for some of us we had a few veterans to the game whose skills out shined the rest.

Needless to say that team came out on top with the highest score!

Cape Town weather did its thing and we were blessed with a light sprinkle which didn't deter us at all! The only down side to the weather was missing out on the spectacular views of Table Mountain from the rooftop. (We do plan on attending again - it is just too good to only do once!)

We left with full hearts and bellies - thank you to Harvest Cafe & Deli for the delicious lunch offering and perfectly brewed coffee!

Let's Talk Boules is the perfect afternoon activity in the heart of the CBD and Vibescout are honoured to have been invited!